Note: This is a scan of a newspaper article clipping. The article has disappeared off of the web, so we pulled a copy from our records and created a high-resolution scan for historical archival purposes. The original article is dated January 2019 and appeared in The Lincoln Business Journal, a subsidiary newspaper of The Midland Business Journal. The author is Dwain Hebda. All transcription remains true to the original article.

"Back then it was terrible; we were college graduates, fresh out and our work wasn't

good," he said. "Luckily [Co-Managing Partner Tony Bertino] was able to find a couple of smaller companies that pitied us enough to sign contracts. Our first client was a floral shop out in Sydney, Nebraska. We made a small Squarespace for them and that was kind of enough to get by for a bit."

The company, which also included Co-Managing Partner Karley Johnson, got its big break when it somehow found its way onto the radar of California production house SoulPancake, the brainchild of actor Rainn Wilson of "The Office" fame.

"We're still not necessarily sure how they got our contact info," Lambrecht said. "But, ever since then, I think people were like 'Oh, maybe we should take these guys seriously.' That gave us the credentials to keep pushing our company forward. Fast forward, we're up to seven employees now and working on international brands."

Not bad for three college pals who got their start in a student-run advertising company program at the University of Nebras­ka-Lincoln. The real-world experience the program offered helped them see gaps in the services offered by area firms.

"There are a lot of creative agencies in Lincoln, Omaha, everywhere, there's a ton," Lambrecht said. "We realized that if we were going to start our own, we would have to be doing something different enough, offering something unique enough and specialized enough to be able to stand out.

"We saw a lot of bigger agencies were not doing a ton of production work in-house, not a lot of animation spe­cifically, just because it's a little bit more ex­epensive, it's time con­suming. So we started the company with the idea that we would be like the go-to small agency for animation, for video for those companies to use."

The SoulPancake gig brought Pixel Bakery more and more clients, and a varied lot at that. The company has produced animation and video products for music festivals to law firms and has grown to offer non-motion branding services, print layout and book design.

"As far as clients that we like, it's people that bring us fulfillment and happiness and we feel like we're a part of something bigger than ourselves. Those are the clients that we like," Lambrecht said. "We have a charter, a moral initiative that says 33 percent of our active client load has to be in the nonprofit sector at all times."

Getting to this point hasn't been without its growing pains as the company went from an idea of three creative people to an actual working business. 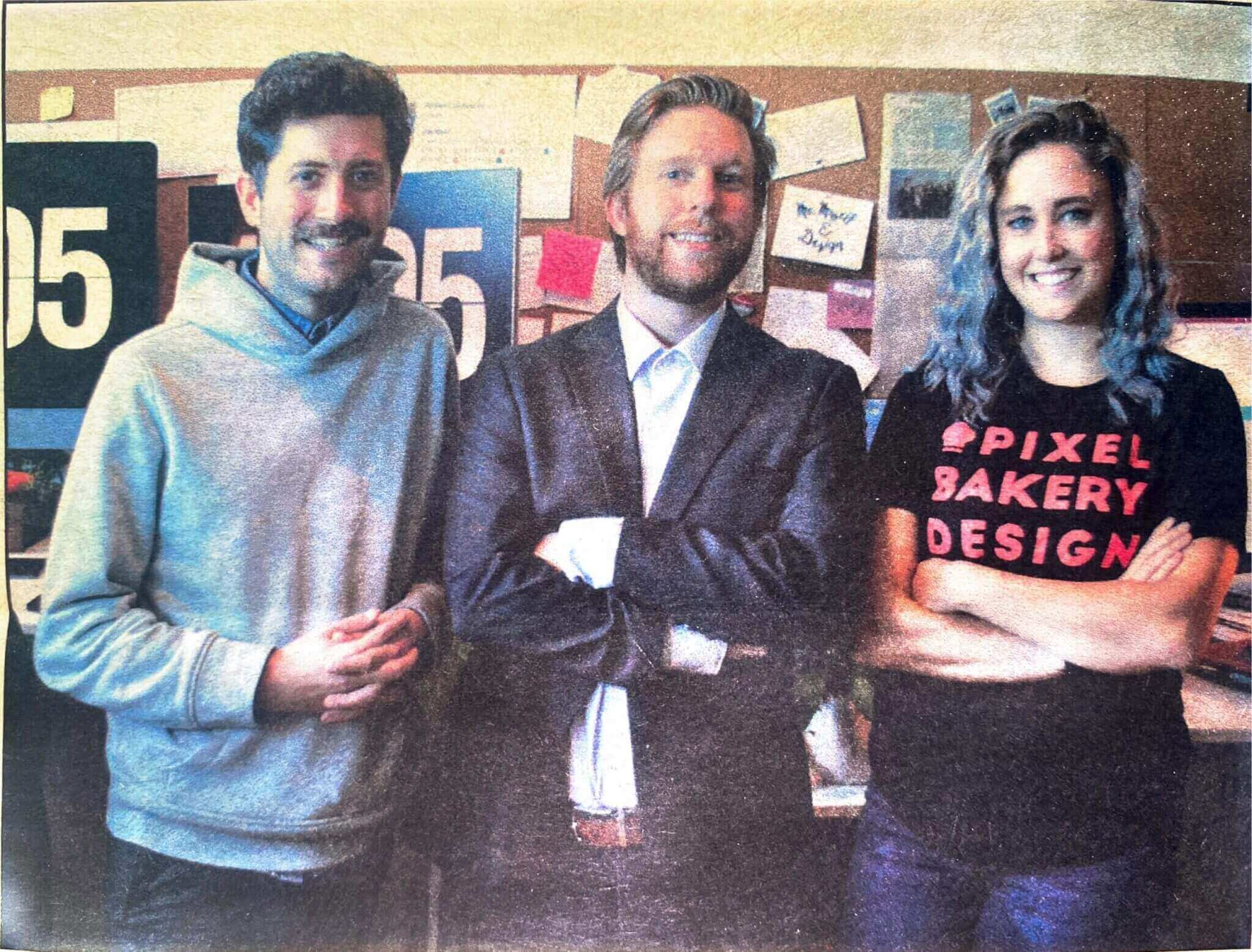 From left, Managing Partner Tony Bertino, Jordan Lambrecht and Karley Johnson. ...The firm got its big break working for actor Rainn Wilson's California production company SoulPancake and has since attracted work from a wide range of clients.

"We didn't know how to start a business," Bertino said. "We just knew we needed to do it and we saw a great opportunity. We decided it was possible, so we'll figure it out. Even three years later there's still things we probably don't know. Every day there's something new that we need to learn and figure out."

Management has figured it out to the point that a second location is becoming a real possibility in the near future.

"We've always played with the idea of opening a second location," Johnson said. "We haven't definitively decided where we want to go, but I know at some point all of us want to live somewhere different and get to experience a new place. There's a lot of searching. We still need to plan for that."

Young Professional of the Year Award – 2020